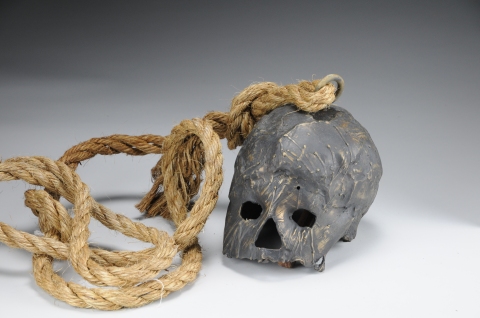 These bronze bells were produced with the Lost Wax Technique at the University of Tampa bronze foundry.  I hung them from thick rope that I antiqued with brown shoe polish, and put them on rusted pulleys.  The viewer could now pull on the bells and bring them to whatever level they desired.  Their deep and rich tone made everyone want to take a turn to ring the bell which was the interaction I was looking for. 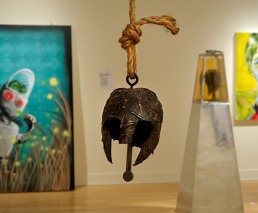 The skull bell was inspired by the novel  “For Whom the Bell Tolls” written by Earnest Hemingway about the spanish civil war.  The Skull is a symbol that’s synonymous with mortality, and bells are commonplace for life changing events.  Whether its the chimes of a wedding, or the somber ringing at a funeral, the bell carries an age old feeling of importance or significance, and I wanted to draw the direct relationship between our mortality and this sound.

The second bell is designed after the spartan helm, which is University of Tampa’s mascot.  But this bell was more than just a reference to the school, but more towards war, and that town or city bells would be rung when enemies were approaching.  The sound of bells during war time must have been terrifying, as they signal for you to arm yourself and prepare to fight.